A great read from our Juvenile Chairperson 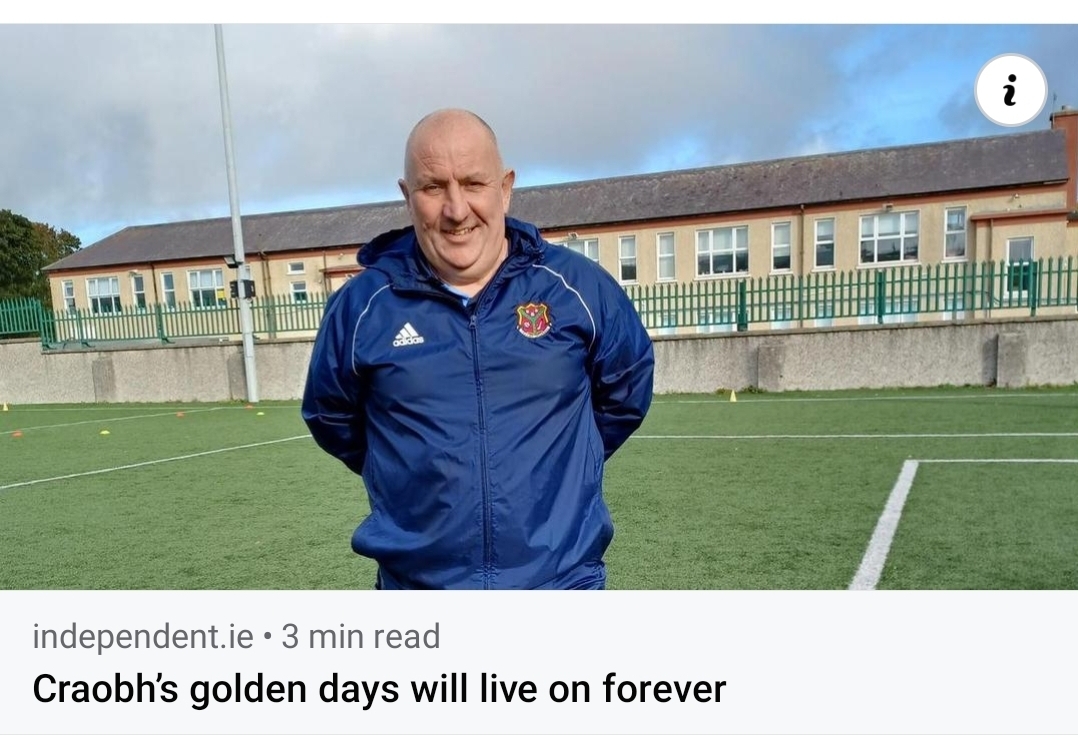 Published: about 2 months ago

A SUNNY, crisp morning in Donnycarney. At the front of the Craobh Chiaráin clubhouse, the legendary Mick Maher is up on a ladder. Tending to another job. Like the million he has done over the years.

There’s big caravan trailers in the car park. A film company are making a production nearby.

There was plenty of drama that took place in the cosy theatre just across the wall. Aidan O’Toole was involved in much of it.

His family are from Donnycarney. He played soccer for St Martin’s Boys. He went to St David’s CBS. There were eight Craobh boys in his class. And soon they had a new recruit.

He had never played GAA. He’ll always remember his first game. An Under-14 Hurling match in Fairview Park.

“Our manager, Brother Murray, was telling us ‘he wanted plenty of hooking and blocking today,’” smiles Aidan. “I told him I didn’t understand what he meant, and he replied: ‘you soon will!’”

He enjoyed hurling and football honours at St David’s. “In 1986, we won the Leinster Senior Colleges Football title. St Colman’s of Newry, with James McCartan, beat us in the All-Ireland final. The great Brian Talty was our coach.”

At Craobh, Aidan came up the grades and onto the senior hurling team at the start of the 90’s.

Chiaráin’s hadn’t won the Dublin Senior Hurling Championship since 1971. In the 90’s, they had a very good side. “We had success in the League but we had so many near misses in the Championship.

“Tommy Ryan retired after playing for 18 years. He became manager. His goal was to win the Dublin Senior Hurling Championship.”

And so they did. In 1998. Aidan was the captain. “It was such a great day for everybody in the club. And such a relief that we had finally managed to get over the line.”

They went on to win the crown three more times. Under respective managers, Philip Cullen, Mick McGuckian and Davy Kelly.

“It was such a golden spell for the club. Four senior championships in eight years. That all stemmed from Scoil Chiaráin who reached twelve Herald Cup finals in-a-row in the Cumann na mBunscol, losing the first and last but winning ten on the trot in between.

“They were such a wonderful group of lads at Craobh. We had so many top-class hurlers.

“We had some fantastic matches inside there in Parnell Park. Some super clashes with O’Toole’s. Both teams so committed, but when it was over, the O’Toole’s lads would come in here, and we’d wander over to their club later in the evening.

“And when you think about it, it’s not all about the Cups and medals. It’s the friends that you make. The memories. Meeting fellas all these years on and being able to have a chat about those days. You have to grab the good times when they are there. They don’t last forever.”

Paddy O’Gara was so much part of it all. Aidan talks of him fondly, and indeed of the remarkable commitment that Mick Maher gives to the club.

Mick is in a black and white picture that hangs on the wall. It was taken in 1983 – the year that Chiaráin’s won every ‘A’ Hurling League in Dublin from Under-10 to Under-21.

There was also the time when Craobh were Division 1 in senior hurling and football. “Most us played in the same position on both teams. I was full-back in hurling, and also in the football.

“I remember in the 2001 Senior Football Championship we played Na Fianna in the second round. They were the holders. We came so close to causing an upset. They just had that bit of experience. They beat us by four points. Dessie (Farrell) was brilliant that day.

“Pitch Number 6 in St Anne’s Park was our ground for so long. We had great times there. People would walk to the game after Mass on a Sunday.”

Now the home is Clonshaugh. A fine facility with excellent playing surfaces. The juveniles play in Maypark. “We also have the astro. That was a great boost to the club. We did that in conjunction with Scoil Chiaráin here beside us.”

Aidan is speaking in the clubhouse. “This building was constructed through mostly voluntary effort from the members.”

It has seen some joyous homecomings, and it will see more. This season, Craobh were relegated from the Senior A Hurling Championship. Losing out on penalties to St Oliver Plunkett/ER. “We’ll work hard to get back up,” states Aidan.

The footballers reached the Junior 1 Championship semi-final. “We are doing well in the ladies’ football and camogie. It’s lovely to see the kids progressing and enjoying it.”

The Gaelic4Mothers crew certainly do that. There’s about 30 in that group. Having a ball.

The club are about to start their Craobh Stars, which will cater for people with Special Needs.

Donnycarney is a settled area. It doesn’t have the big population of before. But, as ever, Craobh is its beating heart. With role models like Seán Shanley, who was Chairman of the Dublin County Board, and the genial All-Star, Alan McCrabbe.

The great hurling championship winning sides had such a deep resolve. And that’s the attitude that’s woven into the club’s DNA.

The Craobh spirit overflows. Always did. And that’s a quality you just can’t bottle.

U16s fundraiser a great night to be had All Welcome ❤💛

No winner of this weeks lotto

Get live information for Club on the ClubZap App